On July 24, 1937, the Robert Burns post 165 of the American Legion in Two Rivers hosted the first Snowfest. Since that time tens if not hundreds of thousands of people both residents and visitors to Two Rivers have enjoyed all of the great things Snowfest has meant to people. A great parade with bands, floats, and of course Snow was all part of so many memories for so many people. 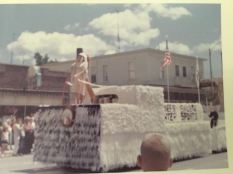 It has also meant a lot of great music has been played in Two Rivers as well from local favorites like Whiskey McKree, The Shy Guys, Dr. Bombay, and count less other groups. It has also included some national acts like The Guess Who, Three Dog Night, and many others. It created musical memories for many as well. For many it has created the The Songs of Snowfest for them.

This is the backdrop and foundation upon which the Friends of Two Rivers Snowfest is building Snowfest 2020. If you are interested in help support our dream check out our Support SnowFest 2020  page and see what you can do to help.

Hope to see you out at some of our events coming up including our Booyah and Chili event coming up November 10th!