So we last left the history of Snowfest in 1962 where the Two Rivers Chamber of Commerce and the Junior Chamber of Commerce along with other local organizations had taken the mantle of Snowfest from the local Lions Club who had brought the event back in 1958. Snowfest continued to celebrate the history of the event and each summer a new Snow Queen was selected. Each summer young women competed through the sales of pins to determine who was selected the Snow Queen that year. The pins like the one shown below continued to celebrate the fact that Two Rivers is the,”Coolest Spot in Wisconsin.” 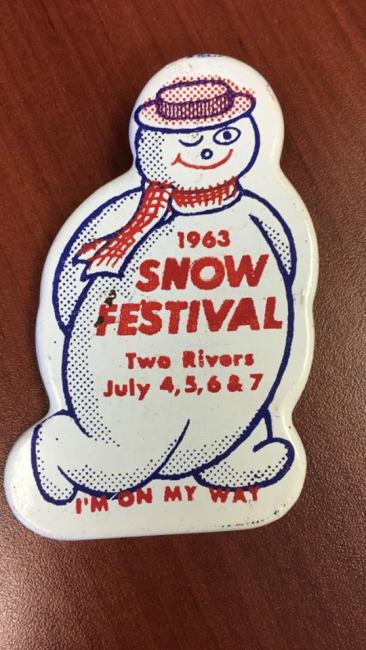 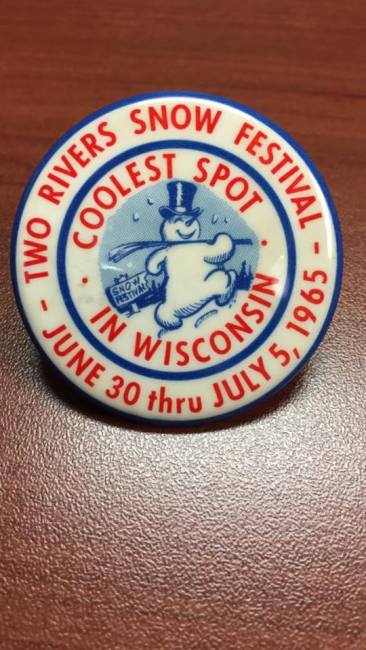 As the years ticked on and Snowfest after Snowfest was held, the Junior Chamber of Commerce or the Jaycees as they came to be known became the primary driving force behind Snowfest each year. Each year, thousands of local residents enjoyed the carnivals, parade, and fun that came to mark Snowfest each year.

As Snowfest entered the 1970’s and 1980’s it became known for a parade second to none in the county. It also became known for drum and bugle corps participating in the parade and then providing performances following the parade at Walsh Field. Corps like the Phantom Regiment, the Madison Scouts, Royal Knights, the Pioneers, and many others can claim to have marched in the Two Rivers Snowfest parade at least once their history. Thanks to Roger Russove from Two Rivers Main Street for the below pictures. 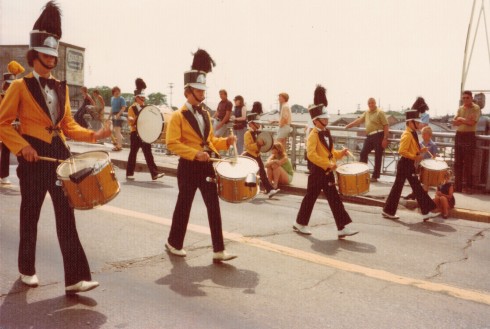 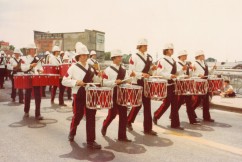 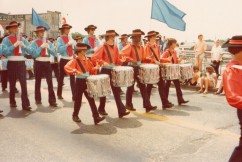 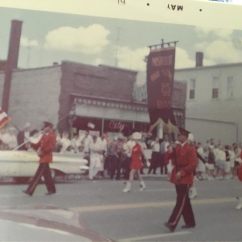 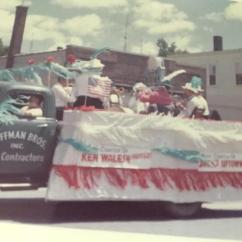 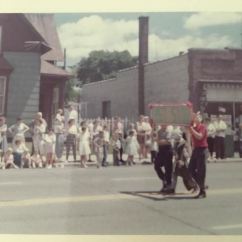 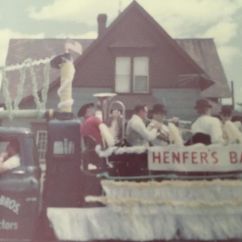 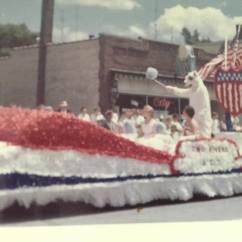 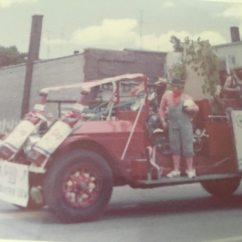 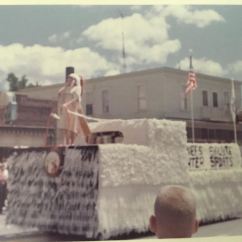 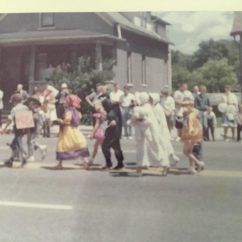 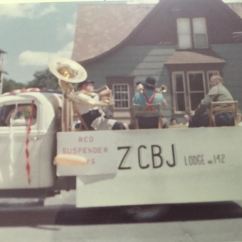 Along with a great parade, a great carnival provided by Tip Top Shows was always one of the best parts of the event for many. Ed Lehrke and his brother who ran the carnival always seemed to find time for Snowfest on the schedule despite the fact that Two Rivers was one of the smaller locations that they came to each year.

However, Ed and his brother retired from the concession and with it a new generation of owners for the carnival. The same loyalty for the event that was there faded away and with it so did the carnival as part of the event. As the event neared its end in the 1990’s other carnival vendors came in, but none brought the same level of support to the event that Tip Top Shows provided.

Snowfest was known for a great parade, a cool carnival, and lastly come of the best music in the area. Some of the best music acts of the day both locally and nationally were brought in to play by the Jaycees. Bands like Whiskey McKree, Hershey and the Squirts, the Shy Guys,and other local bands joined the likes of national touring acts and individual performers to bring a great environment to the festival. One of the great parts of Snowfest always was the music and countless people note that some of their best memories of Snowfest revolved around a given band or performer being part of the act.

However, as the turn of the 1990’s came a changing economy, lower levels of participation in the Jaycees, and other concerning signs loomed on the horizon for Snowfest. Low participation lead to the end of the parade as supported by the Jaycees in 1995. A local bar owner Tom Jones brought it back successfully in 1996, but was rained out in 1997. By 1998 it had become a thing of the past.

With the parade now gone, and the carnival no longer part of the event, music became the focus on the event. However, interest began to wane in the event and with lower numbers of members in the Jaycees it became harder to support the event. Everything came to a head in 1999 when at the turn of the century the decision was made to put Snowfest on hold.

Little did anyone know that this hold would have lasted 20 years. All of the fun, excitement, music and fun that were part of Snowfest now all just memories of something so many enjoyed. Many thought that it was all just part of the history of Two Rivers.

In the years that have passed several have tried to bring the event back in some form, but all failed to capture the thrill of the event. 2018 marked the start of the return of the event and we are excited to bring it back to Two Rivers July 24-26, 2020. This return marks 21 years since Snowfest was held last. It marks 83 years to the day from when it was first held in Two Rivers in 1936.

Many things have changed, the Jaycees are no longer part of the Two Rivers landscape, people have moved in and out of town and the fabric of Two Rivers has forever been changed. However, one thing has remained constant, Two Rivers is the, “Coolest Spot in Wisconsin!” Also, the music, parade, and fun of Snowfest is coming back to Two Rivers as well!!! We look forward to seeing all of you out enjoying the return of an old friend!