So a few weeks ago we introduced you to How it all began and the events in the summer of 1936 that lead to the discovery of snow and formed the basis of Snowfest. Well, one thing led to another and the following year July 24, 1937 Two Rivers Snow Festival, or Snowfest for short was born.

In 1936, the city of Two Rivers was to celebrate a centennial and the community members felt it was so important and interesting that the snow was found that they decided to include it in the parade. As one would guess finding snow in the summer was something pretty interesting and lead to some national news interest on Two Rivers.

Seeing this as something new and different the American Legion Post 165 decided to rename their summer festival and parade Snow Festival for 1937. Additionally, the queen of the parade would now be called the Snow Queen and she would sit on a throne of ice.

Additionally, the community also sought to work recreate the interest of the snow being found and it worked to bury snow in the fall to dig it out in the summer. The first snow queen was Ruth Hefner (Glandt) who won a competition amongst local girls to be the first ever Snow Queen. She is pictured below on her ice throne.

The following year, 1938, was marked by the arrival of the Goodyear Rubber Balloon parade. This was worth over $30,000 at that time, just imagine the cost today. It was the only time this was in Wisconsin at the time and was something else different and unique to celebrate this great event. Some images donated by Glenn Zimmer show some of the balloons in the event. 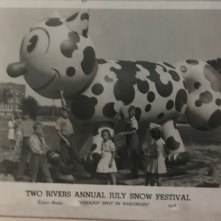 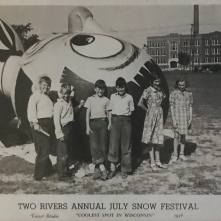 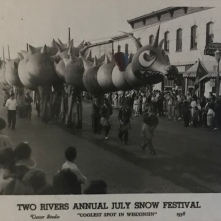 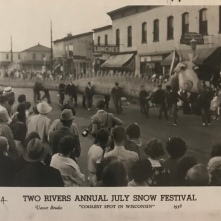 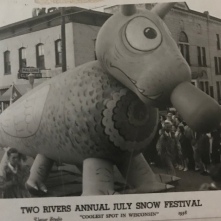 One of the other great things that came out of the transition to Snow Fest was a way to compete. Starting with the first Snowfest and those that followed were snowball fights between the local Junior Leagues or Chamber of Commerce members. In pictures donated by Glenn Zimmer and Gib St. Pierre we see just some of the no doubt awesome images of the events as they happened. No doubt Two Rivers often had the upper hand over Manitowoc in these events! 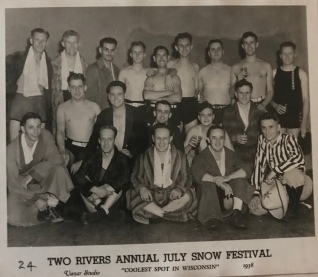 Each summer that followed, Snowfest with all of the fun of the bands, parades, and Snow Queens filled the summer of Two Rivers residents. This happened with the support of the community and the American Legion Post 165 until 1941 when due to the onset of the hostilities of World War II Snowfest took a pause.

Below you can see some of the Snow Queens for 1938-1940. Courtesy of Glenn Zimmer 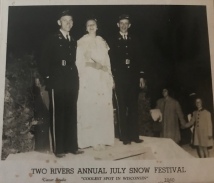 With the world in chaos from World War II and then the Korean Conflict it would be a period of time until Snowfest returned to the streets and hearts of Two Rivers. In our next blog we will visit Snowfest when it returns to Two Rivers in the 1960’s this time with a different organization looking to mark its return.

Want to support Snowfest this summer? Click this link: Support SnowFest 2020. You can also purchase Snowfest merchandise through our online store as well as locally at Schroeder’s Department Store!!